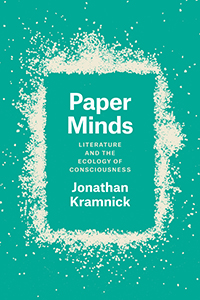 Jonathan Kramnick’s research and teaching is in eighteenth-century literature and philosophy, philosophical approaches to literature, and cognitive science and the arts. He is the author of three books. His new book, Paper Minds: Literature and the Ecology of Consciousness (Chicago, 2018), asks what distinctive knowledge the literary disciplines and literary form can contribute to discussions of perceptual consciousness, created and natural environments, and skilled engagement with the world. Portions have appeared in Critical Inquiry, Representations, and elsewhere. Before that, Actions and Objects from Hobbes to Richardson (Stanford, 2010) considered representations of mind and material objects along with theories of action during the long eighteenth century. And before that, Making the English Canon: Print Capitalism and the Cultural Past, 1700-1770 (Cambridge, 1999) examined the role of criticism and aesthetic theory in the creation of a national literary tradition. His current research is on the aesthetics of designed environments, including the garden, the park, and the house. Finally, he is director of the Lewis Walpole Library and the editor (with Steven Pincus) of the Lewis Walpole Series in Eighteenth-Century Culture and History for Yale University Press.

John Guillory’s teaching and research focus on two areas: early modern literature, and the histories of criticism, literary theory, and literary scholarship. In his period field, he is currently working on a book entitled, “Things of Heaven and Earth: Figures of Philosophy in English Renaissance Writing.” This study looks at the emergence of the philosopher as a distinct social type in the Renaissance, and at the complex interrelations between philosophy and theology on the one side, and philosophy and literature on the other. Several chapters from this monograph have been published, including essays on Shakespeare, Bacon, and Milton. He is further interested in studying the development of discursive prose in the early modern period, especially in relation to norms of “clarity” and the long decline of rhetoric. In the area of the history and sociology of criticism, he has published on topics that include the problem of canon formation, the American reception of Pierre Bourdieu, the history of literacy, the theory of reading, the theory of pedagogy, professionalization and graduate education, science studies, the evaluation of scholarship, and media studies. He is currently working on a disciplinary history entitled, “Literary Study in the Age of Professionalism.” This study undertakes a sociology of literary study in the context of the professionalization of science and scholarship in the new American university of the later nineteenth century. Essays from this work have been published on several topics, including early disciplinary formations such as philology and belles lettres, and the concurrent demise of the rhetorical curriculum and rise of bureaucratic writing genres such as the memorandum.

Nancy Yousef specializes in literature and philosophy of the Enlightenment and Romanticism. Her research interests include intersections between ethics, psychoanalysis and literary representation. She is the author of Isolated Cases (Cornell University Press, 2004) and is currently writing a new book on representations of intimacy. Among her other publications are essays on Jean-Jacques Rousseau, Mary Wollstonecraft, William Wordsworth, Mary Shelley, and Charles Dickens.  She has been the recipient of fellowships from the American Council of Learned Societies (2002-2003) and the National Humanities Center (2006-2007).

Tasha Eccles works on eighteenth-century and Romantic literature, with particular interests in theories of reading, the novel, and the long history of formalism. Her book project examines modes of reading cultivated by a group of late eighteenth- and early nineteenth-century novels and tales, asking what aesthetic experiences like being held in suspense, feeling complicit, or longing for a different plot have to do with living in a political collective. She has also written on the reception of Laurence Sterne in Russia, and she is working on a co-authored manuscript on suspense and the digital humanities with members of the Stanford Literary Lab. This year she is teaching courses in the history of poetry, narrative suspense, and Jane Austen and Walter Scott.