Home » Calendar » The 20/21st Century Colloquium: Translation in the Age of World Literature

The 20/21st Century Colloquium: Translation in the Age of World Literature 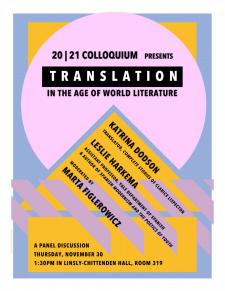 “Translation in the Age of World Literature” will take up the following questions: How have the practice and politics of translation evolved amidst the recent turn to world literature? How have (un)translated languages worked with and against another in national, regional, and comparative literary studies? And how have translators taken up their tasks in the first place? Our panelists will be Katrina Dodson, the award-winning translator of Clarice Lispector’s fiction, and assistant professor Leslie Harkema, a scholar and translator of Spanish poetry. Our moderator will be assistant professor Marta Figlerowicz, a scholar of American, British, French, and other literatures.
___

Professor Harkema’s first book, Spanish Modernism and the Poetics of Youth: From Miguel de Unamuno to La Joven Literatura (forthcoming from University of Toronto Press), examines the little-studied relationship between the renowned essayist, novelist, and poet Miguel de Unamuno and several Spanish writers associated with the so-called Generation of 1927, focusing on youth as a central concept in their aesthetic thought and self-fashioning. The poetic tradition that binds these writers together—traced through Unamuno’s early poetry, the edition of his essays by the Residencia de Estudiantes, the 1927 homage to the Golden-Age poet Luis de Góngora organized by the younger writers, and the appropriation of Unamuno’s ideas by both right-wing and leftist writers in the late 1920s and early 1930s—brings to light the central role that the twentieth century’s reimagining of adolescence and youth played in the development of literary modernism in Spain. She is currently working on a second book-length project, tentatively titled Faithful Betrayals: Translation and the Critique of Literary Culture in Modern Spanish Writing, which undertakes to examine Spain’s relationships to its European neighbors in the 19th and 20th centuries—as well as the internal dynamics of interactions between regional nationalisms during this period—through the lens of Spanish writers’ attitudes toward and practices in literary translation.

Katrina Dodson is the translator from the Portuguese of The Complete Stories, by Clarice Lispector (New Directions, 2015), winner of the 2016 PEN Translation Prize, the Lewis Galantière Prize from the American Translators Association, and a Northern California Book Award for translation. She holds a PhD in Comparative Literature and Designated Emphasis in Women, Gender, & Sexuality from the University of California, Berkeley, with a dissertation on Elizabeth Bishop in Brazil. She has written for Guernica, McSweeney’s, and The Millions, and her translations have appeared in Harper’s, Granta, Lapham’s Quarterly, and elsewhere. She is currently adapting her Clarice Lispector translation journal into a book and working on a new translation of the 1928 Brazilian modernist classic, Macunaíma: the Hero Without a Character, by Mário de Andrade, for New Directions. Katrina has taught undergraduate courses in Comparative Literature and Portuguese language at the University of California, Berkeley. She is currently a mentor at the Mills College MFA in Translation Program and formerly on the faculty of the Bard College Language & Thinking Program. A San Francisco native, Katrina lived in Brazil intermittently for a total of four years, first as an English teacher from 2003-2004 and most recently as a Fulbright-Hays Fellow from 2011-2012. Her mother was born in the rural village of Nam Định, in northern Vietnam, and her father is from Oak Park, Illinois. Her languages include English, Portuguese, French, Spanish, Vietnamese, and Latin.