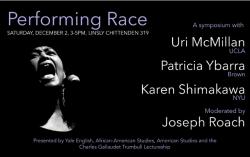 How is racial identity performed? How are racial formations contested, manipulated, or confounded through performance? Professors Uri McMillan, Karen Shimakawa, and Patricia Ybarra, three leading scholars of theater and performance studies, will present their recent work examining the ways racial and national identity have been constituted on stage or via other performance media, with Patricia Ybarra focusing on anti-neoliberal indigenous performances, Karen Shimakawa on representations of Asian-Americanness as the abject other to American national identity, and Uri McMillan on African-American women performers’ techniques of self-objectification. Following their talks, Professor Joseph Roach will lead a conversation on themes and concerns common to all three.