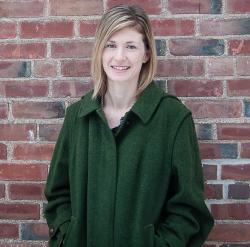 Danielle Chapman is the author of the collection of poems, Delinquent Palaces, published by Northwestern University Press in 2015. Her poems appear regularly in the New Yorker, the Atlantic, Harvard Review, and elsewhere. She’s contributed to the recent anthologies, Resistance, Rebellion, Life, from Knopf, and Women of Resitance: Poems for a New Feminism, from OR Books. She also writes criticism and essays and is at work on a book of nonfiction that looks at Southern history and culture through the lens of a tavern in Middle Tennessee, built in 1790, that she grew up in. An excerpt from the book, “The Country Way,” appears in the Fall 2017 issue of The Oxford American.

Andie Berry is a first-year PhD student in English at Yale University. Her research interests focus on contemporary African American literature and dramatic literature as she explores the intersections between trauma, memory, performance, and race. Specifically, she is curious about common representations of black suffering and death that are being reappropriated and revised in the late-20th and 21st-century into more optimistic images. She came to poetry in college via the St. Louis slam poetry scene.

David M. de Leon is a writer, academic, and theater artist. Creative work has appeared in places like Rattle, Fence Magazine, Diagram, Strange Horizons, Bat City Review, 2River View, Anderbo, The Cortland Review, Box of Jars, Anti-, and the anthology Only The Sea Keeps. Recently his poetry manuscript was a finalist for the Dorset prize at Tupelo Press and the Lena-Miles Wever Todd prize at Pleiades. Other awards include the Mary M. Fay Poetry Award, an Academy of American Poets prize, a Pushcart nomination, the Helen Gray Cone Fellowship for Graduate Studies, the Blanche Colton Williams Fellowship, the Miriam Weinberg Richter Award, and the McGlinchee Prize for a Play. Currently he is working on incorporating poetry and music. He keeps a website at davidmdeleon.com.

Liz Lazzari is a Master’s student in the Yale English Department. Liz’s third-grade teacher, Mrs. Finefield, first introduced her to poetry and poetry has traveled with her since that day. For the past thirteen years she has served as a U.S. Army Officer across the U.S. and abroad. Upon graduating in May, she will return to her alma mater, the United States Military Academy at West Point. There she will teach plebes and prepare them for the challenges of our contemporary world by arming them with poetry, so that they might remember to find the human within themselves and in their engagement with others.

Brandon Menke is a poet and Ph.D. candidate in English at Yale University. He received his MFA in Creative Writing from New York University. His dissertation examines queer identities, lyric form, and regionalist aesthetics in 20th-century American literature and visual art. In addition to co-organizing the Graduate Poets Reading Series, he serves as the editor-in-chief and poetry editor of Palimpsest: Yale Graduate Literary and Arts Magazine, co-convenes the 20th- and 21st-Century Studies Colloquium, and has served as a Guest Critic in the Yale School of Art. Currently, he is at work on a book project with artists Kyle Goldbach and Martin Bek.

Claire Schwartz is the author of bound (Button Poetry, 2018). Her poetry has appeared in Apogee, Bennington Review, The Massachusetts Review, and Prairie Schooner, and her essays, reviews, and interviews in Georgia Review, Los Angeles Review of Books, The Iowa Review, Virginia Quarterly Review, and elsewhere. She is a PhD Candidate in African American Studies and American Studies.