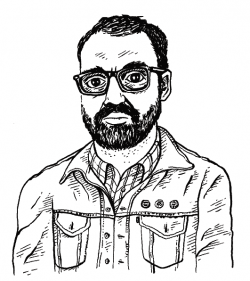 Born in New Britain, Connecticut and raised by a machinist and a waitress, Jason Labbe earned his MFA from the University of Virginia, where he was a Henry Hoyns Fellow. He is the author of a full-length collection Spleen Elegy (2017) and a handful of chapbooks, including Blackwash Canal (2011) and Dear Photographer (2009). His poems and prose appear widely in such publications as Poetry magazine, Boston Review, A Public Space, Conjunctions, Colorado Review, and DIAGRAM. Labbe has taught writing at the University of Virginia, the University of Connecticut, and Southern Connecticut State University. Also a drummer and recording engineer, he has worked with many artists in New England and New York City. He splits his time between Bethany, Connecticut and Brooklyn, New York.