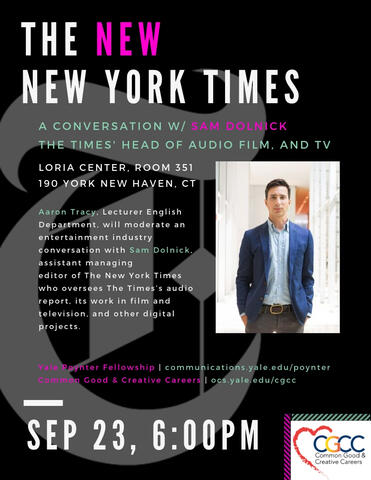 Sam Dolnick is an assistant managing editor of The New York Times who oversees The Times’s audio report, its work in film and television, and other digital projects. He helped launch The Daily, one of the top podcasts in the country, as well The Weekly, the Times’s new television documentary series where he is an executive producer. Sam also has worked on a number mobile initiatives and helped launch The Times’s early experiments in virtual reality.
Before becoming an editor, Mr. Dolnick won the George Polk Award for Justice Reporting for his year-long investigation into dysfunction inside New Jersey’s privately run halfway houses. Before joining the masthead, he worked as a the newsroom’s lead mobile editor, and the deputy sports editor overseeing investigative and feature stories.
He joined The Times in 2009 as a metro reporter covering the Bronx and immigrant communities across the city. He has written features for the Sunday Magazine, including a profile of a the Sinaloa cartel’s 90 year-old drug mule, and for Style, where he wrote about a man who decided to become the most ignorant person in Trump’s America.
Before joining The Times, Mr. Dolnick worked as a foreign correspondent for the Associated Press in New Delhi, where he covered India, Bangladesh, Sri Lanka and Nepal. He began his career as a reporter at the Staten Island Advance.