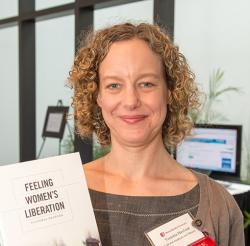 Victoria Hesford is an Associate Professor of Women’s, Gender, and Sexuality Studies at Stony Brook University. Professor Hesford’s research can be situated at the intersection of American studies, feminist cultural studies, and queer studies, and focuses on how, and to what effect, political projects and movements are mediated through mass culture in twentieth and twenty-first century American culture. Her book Feeling Women’s Liberation (Duke University Press, 2013) offers a critical history of the rhetorical production of the women’s liberation movement in the U.S. in and around 1970 in order to track the emotional economies that shaped the movement’s political constituency and enacted its political goals and claims. “Gesture, Revolt, and 1970s Feminism in John Cassavetes’ A Woman Under the Influence (1974)” turns to Cassavetes’ 1974 film in order to think about the histories of U.S. feminisms in the 1970s through the technologies of visual media.