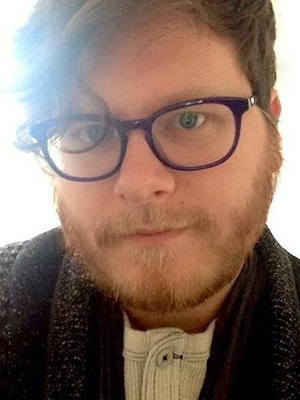 Brandon Menke is a poet and Ph.D. candidate in English Literature. His dissertation examines lyric form, regionalist aesthetics, and networks of queer intimacy in American literature and visual art from the 1920s to the 1970s. While at Yale, he has coordinated the American Literature in the World Graduate Conference with Wai Chee Dimock, served as editor-in-chief and poetry editor of Palimpsest: Yale Graduate Literary and Arts Magazine, and co-organized the Graduate Poets Reading Series. He has served as a Guest Critic in the Yale School of Art and was previously a co-convener of the English department’s 20th- and 21st-Centuries Studies Colloquium, Contemporary Poetry Colloquium, and the Literature, Arts, and Environment Colloquium. Prior to joining the department, he received his MFA in poetry from New York University and served as poetry editor of Washington Square Review. In addition to completing his dissertation, he is currently at work on a manuscript with fellow poet Jahan Khajavi that mines the deep cultural archive of homoerotic imagery in the Wild West; their poems metabolize and celebrate the iconography of the gay cowboy while undercutting such mythopoetics with an awareness of the real, contested space of the American frontier and the violent erasure of its Native peoples and ecologies. His work can be found or is forthcoming in bæst: a journal of queer forms & affects, Columbia Journal, Denver Quarterly, Public Books, Barrow Street, and elsewhere. He is an Assistant Editor at The Yale Review and lives with his partner in South Bend, Indiana.

“From the First Book of Samuel,” Emotive Fruition and Lambda Literary, Summer 2016.

“Transform the Energy: Yoko Ono’s Imperatives and the Optative Mood.” Roundtable: “We Who? Mutuality and Poetic Address.” Association for the Study of the Arts of the Present Conference, Virtual, October 2021.