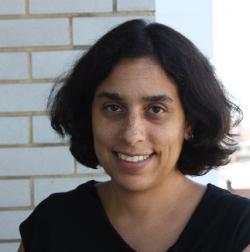 Sonya Posmentier earned her Ph.D. in English from Princeton University (2012), her M.F.A. in Creative Writing from the University of Oregon (1999), and her B.A. in English from Yale University (1997). Her first book Cultivation and Catastrophe: The Lyric Ecology of Modern Black Literature was published in 2017 by Johns Hopkins University Press. This book argues that extreme environmental experiences such as hurricanes, floods, and earthquakes as well as the slower social disaster of enforced agricultural enslavement have shaped black modern literature and culture, and in particular poetic forms. Prof. Posmentier is at work on a new book, Black Reading, about the intersecting histories of black cultural studies and modern lyric theory. Her essays and articles have appeared in The New York Times Book Review, American Literature, and the edited collections Race and Real Estate and the Blackwell Companion to the Harlem Renaissance, and she has published poems in Grey, The Seneca Review, and Perihelion. She regularly teaches a survey of Twentieth-Century African American Literature, as well as graduate and undergraduate courses on modern poetry, environmental literature, black criticism and theory, and black diaspora.