Graduate study can often involve sustained periods of solitary reading and work in isolation; but it should also be an intensely conversational and social endeavor. Responding to the newest work of scholars in the field, developing discussions and collaborations with one’s peers, and sharing one’s own work publicly are essential parts of graduate education. A community of criticism enables a kind of intelligence that its members could not generate in isolation. Our graduate program seeks to provide training in all the arts of collegial life: creating a mutually supportive community of scholars, raising the bar of public discussion, enabling criticism and creative thought in the give-and-take of rigorous conversation.

For these reasons the English department runs a common lecture series together with seven principal colloquia. All graduate students affiliate themselves with at least one colloquium, but students are encouraged to attend as many events as possible, in addition to the department lectures.

Within each colloquium, graduate students elect a representative who, along with a faculty member, acts as one of the conveners of the group. The conveners collect input from all colloquium members and then plan each year’s events. The events themselves take many forms, including talks by invited scholars, circulated work in progress, and panel discussions. Graduate student representatives also sit on the department’s Lectures and Colloquia Committee, which in the late spring plans the departmental lecture series for the following year, after soliciting nominations of speakers from the colloquium members.

The Medieval Colloquium allows scholars working in earlier periods a chance to present their research. The colloquium encourages conversation within and across these traditionally distinct fields, and aims to draw on Yale’s interdisciplinary depth in these areas through involvement with the Medieval Studies Program.
See Upcoming Medieval Colloquium Events

The Renaissance Colloquium is designed to provide opportunities for students and faculty who are interested in the literature and culture of early modern England to discuss new work in the field. Speakers will be invited both from within and without the Yale community as the colloquium works to develop and explore areas of shared interest.
See Upcoming Renaissance Colloquium Events

The Eighteenth and Nineteenth Century Colloquium pursues research specific to the 18th century, Romanticism, and Victorianism, as well as projects that cross historical boundaries. Half of the sessions involve work-in-progress by graduate students and faculty; two or three outside speakers are invited to present their new work; and a panel is typically scheduled on a topic of current theoretical, methodological, or pedagogical importance.
See Upcoming 18th/19th Century Colloquium Events

The Race, Gender, and Sexuality Studies Colloquium aims expressly to promote intersectional, interdisciplinary, and historically and regionally comparative scholarship, as well as to offer a forum for discussion of the workings of race, gender, and sexuality in the academy, including how they inform professional development. It hosts presentations of recent work given by Yale faculty, invited speakers, and graduate students. All students, regardless of their likely or confirmed areas of specialization, are welcome to come and hear any colloquium speaker.
See Upcoming RGSS Colloquium Events

The Theory and Media Studies Colloquium aims to encourage all kinds of theoretical inquiry, including cultural studies, literary theory, gender and sexuality studies, philosophical and linguistic criticism, postcolonial theory, and critical race studies. It also serves as the forum for work on the place of textual analysis in the broader context of media studies. This includes the field commonly known as “history of the book”—the material and social dimensions of textual culture, from scroll to codex to screen, and the place of literary cultures and literacies within the great media shifts of earlier times as well as our own day.
See Upcoming TMS Colloquium Events

In addition to these seven principal colloquia, the English department also supports a number of affiliated groups:

The Contemporary Poetry Group, which consists of faculty, graduate students, and members of the wider Yale community, meets several times a semester to discuss the recent work of living poets. Participants take turns selecting a poet’s work for a short photocopied packet and meet on campus in the early evening to discuss the poems together.

The Graduate Poets’ Reading Series arranges public readings, about twice a semester, for graduate students in English and allied departments who write poetry. The format of the readings has a group of graduate-student poets as the “opening act” for a more experienced poet, invited to New Haven for the reading.

The British Studies Colloquium is an interdisciplinary group organized by and for graduate students. The colloquium provides a comfortable environment for graduate students to present their work on any aspect of British culture. The group organizes events aimed at furthering interdisciplinary scholarship by bringing together students from the departments of History, History of Art, Renaissance Studies, English, and Comparative Literature.

The Literature, the Arts, and the Environment Colloquium sees climate change and the catastrophic loss of ecosystems and species diversity as the defining issues of our time, spurs to rethink our critical methodologies, and to reconnect the humanities with the sciences and the arts. How do aesthetic representations of nature affect our understanding of the planet, and how does thinking about the planet affect our understanding of the humanities? The colloquium hosts conversations that engage relationships between disciplinary forms of knowledge—between earth science and social history, between music, film, and the visual arts—while also hewing close to literary traditions that have long honored the practice of representing  human and nonhuman ecologies. It is a forum for faculty and students to workshop their conference papers, articles, and dissertation chapters, with occasional roundtables and presentations by artists, writers, performers, and scholars. 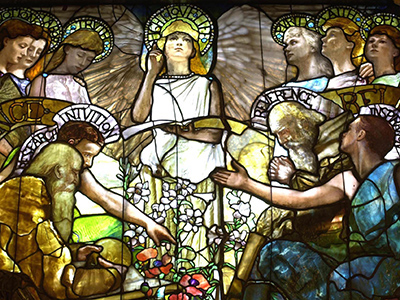