Home » Calendar » American Literature and the Rise of the Environment: Michael Warner

American Literature and the Rise of the Environment: Michael Warner 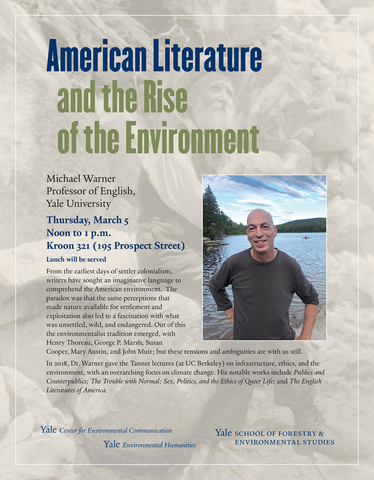 Event time:
Thursday, March 5, 2020 - 12:00pm to 1:00pm
Location:
Kroon 321 (195 Prospect Street) See map
Event description:
Michael Warner will give a talk on how the environment is represented in American literature presented by The Yale Program on Climate Change .
From the earliest days of settler colonialism, writers have sought an imaginative language to comprehend the American environment.  The paradox was that the same perceptions that made nature available for settlement and exploitation also led to a fascination with what was unsettled, wild, and endangered. Out of this the environmentalist tradition emerged, with Henry Thoreau, George P. Marsh, Susan Cooper, Mary Austin, and John Muir; but these tensions and ambiguities are with us still.
In 2018, Dr. Michael Warner gave the Tanner lectures (at UC Berkeley) on infrastructure, ethics, and the environment, with an overarching focus on climate change. His notable works include Publics and Counterpublics; The Trouble with Normal: Sex, Politics, and the Ethics of Queer Life; and The English Literatures of America.
Thursday, March 5
Noon to 1 p.m.
Kroon 321 (195 Prospect Street)
Lunch will be served
Tags:
Talks and Lectures