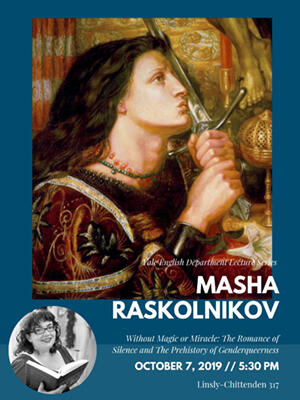 The English Department Lecture Series is pleased to welcome professor Masha Raskolnikov presenting her talk “Without Magic or Miracle: ‘The Romance of Silence’ and The Prehistory of Genderqueerness”.

The twelfth-century romance known as “Silence” was discovered in 1911, hidden in a box marked ‘unimportant documents.’ Since then, it has become an important source for scholars interested in understanding gender in the Middle Ages. This romance remains one of the most gender-transgressive works that have survived from the Middle Ages to reach modern readers. This talk examines the politics of gender identity, willed and unwilled, as depicted in this work, including the tension between understanding Silence as a feminist hero, as a transgender ancestor and as a genderqueer rebel.

After receiving her BA from the interdisciplinary College of Letters at Wesleyan University, Masha Raskolnikov went on to earn her MA and PhD at UC Berkeley’s Department of Rhetoric; at the time she arrived at Cornell, she had never actually been, officially, a member of an English Department, but she finds herself quite comfortable in this one. She is primarily interested in critical theory as a project of unmaking “common sense,” and in working with medieval literature as a means of doing so; she is also interested in feminist, lesbian, gay and transgender/transsexual studies. She is the author of “Body Against Soul: Gender and Sowlehele in Middle English Allegory,” Ohio State University Press, 2009.