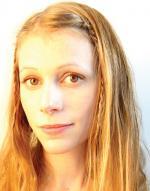 Lauren Redniss is the author of three works of visual non-fiction. Her most recent book, Thunder & Lightning: Weather Past, Present, Future, won the 2016 PEN/E. O. Wilson Literary Science Writing Award. Her previous book. Radioactive: Marie & Pierre Curie, A Tale of Love and Fallout, was a finalist for the 2011 National Book Award. She is also the author of Century Girl: 100 years in the Life of Doris Eaton Travis, Last Living Star of the Ziegfeld Follies. Her writing and drawing has appeared in numerous publications including the New York Times, which nominated her work for the Pulitzer Prize. She has been a Guggenheim fellow, a fellow the New York Public Library’s Cullman Center for Scholars & Writers, and Artist-in-Residence at the American Museum of Natural History. Redniss was the recipient of a “Genius Grant” from the John D. and Catherine T. MacArthur Foundation in 2016. She is a 2017 New America Foundation fellow. She teaches at Parsons the New School for Design in New York City.

The National Book Foundation wrote the following in its citation of Radioactive, the first visual book to be named a finalist for the National Book Award in Non-Fiction: “Redniss’ achievement is a celebration of the essential power of books to inform, charm, and transport. In marrying the graphic and visual arts with biography and cultural history, she has expanded the realm of non-fiction.”