Ruth Yeazell in New York Review of Books: Painting Herself 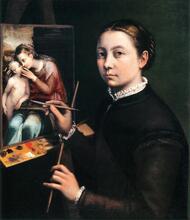 Among the legendary figures whose stories Giovanni Boccaccio relates in Famous Women (1361–1362) is a Roman virgin named Marcia, who earned her fame as much for her skills as an artist, he tells us, as for her chastity. Both outpacing and outearning her contemporaries, the energetic Marcia is said to have worked in ivory as well as paint, but the only object Boccaccio specifically describes is a self-portrait, “painted on a panel with the aid of a mirror.” A charming illumination from an early-fifteenth-century French manuscript shows Marcia at work on the picture, her visage tripled, as she gazes at the small convex mirror reflecting her face in her left hand, while her right wields a brush with which she touches up the lips of the painted image.