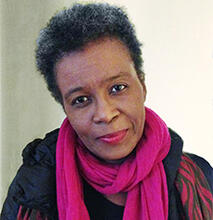 A recent Yale News article by Bess Connolly Martel commented that noted poet, essayist, and playwright Claudia Rankine will join the Yale faculty this fall as the Frederick Iseman Professor of Poetry.

Rankine is the author of the bestselling book “Citizen: An American Lyric” (Graywolf, 2014), which uses poetry, essay, cultural criticism, and visual images to explore what it means to be an American citizen in a “post-racial” society. “Citizen” was the winner of the 2015 Forward Prize for Best Collection, the National Book Critics Circle Award for Poetry (it was also a finalist in the criticism category, making it the first book in the award’s history to be a double nominee), the NAACP Image Award, the PEN Open Book Award, the LA Times Book Award for poetry, and the Hurston/Wright 2015 Legacy Award. A finalist for the 2014 National Book Award, “Citizen” was selected as an NPR Best Book of 2014, for which the citation read: “This collection examines everyday encounters with racism in the second person, forcing the reader — regardless of identity — to engage a narrative haunted by the deaths of Michael Brown, Trayvon Martin, and Renisha McBride.” “Citizen” also holds the distinction of being the only poetry book to be a New York Times bestseller in the non-fiction category.

Her other collections of poetry include “Don’t Let Me Be Lonely: An American Lyric” (2004) and “Nothing in Nature is Private” (1994), which was honored with the Cleveland State Poetry Prize.

Langdon Hammer, the Niel Gray Jr. Professor of English and chair of the Department of English, adds, “Claudia Rankine is a poet who tests the boundaries of poetry, and in the process expands what poetry can do and say. She has helped Americans think about race and identity in productively fresh, pointed, complex, and disorienting ways. She is also an innovative, intellectually challenging teacher, involved not only in poetry but in film, theater, and visual art, who will make connections across departments and programs at Yale.”

Rankine has been awarded fellowships from the Academy of American Poets, the National Endowment for the Arts, and the Lannan Foundation. In 2013, she was elected chancellor of the Academy of American Poets. She received a Lannan Literary Award in 2014. Rankine previously taught at the Case Western Reserve University, Barnard College, University of Houston, Pomona College, and University of Southern California.

The Frederick Iseman Professorship is the first endowed chair at Yale dedicated solely to the field of poetry. Iseman ’74 is chair and chief executive officer of CI Capital Partners LLC, which he founded in 1993. He established the chair of poetry in Yale’s Faculty of Arts and Sciences in honor of his class’ 40th reunion.

For the full Yale News article go to: http://news.yale.edu/2016/05/31/celebrated-poet-claudia-rankine-named-iseman-professor-poetry-yale