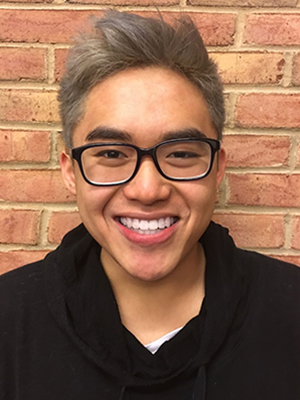 Minh (they/he) is a senior in Silliman College studying English and Women’s, Gender, and Sexuality Studies. His research focuses in 20th and 21st century Asian American and African American literatures, with emphasized interest in gender, sexuality, and underground aesthetics. On campus, he’s worked as a research assistant for the English Department and MacMillan Council on East Asian Studies; staffed at the Asian American Cultural Center; and edited for publications such as DOWN Magazine, Negative Space, and 295 Magazine. Currently, he sings with his all-gender a cappella group, Out of the Blue, and is involved with the Poorvu Center for Teaching and Learning as a Writing Partner and Academic Strategies Mentor.

Simultaneously he is writing a thesis that studies Vietnamese refugee migration and the transatlantic slave trade. Through this comparative study, he seeks to re-read water as a liberatory aesthetic tool rather than as a geographic site of displacement and trauma. As he enters his final undergraduate year, he is excited to expand his scholarly endeavors beyond the classroom.

Beyond campus, he is dedicated to the public humanities, and is conducting oral histories and archival research for a yearlong exhibit on the Black Panthers at the local gallery Artspace, volunteering at New Haven Reads, and serving as a writing fellow for the Yale Prison Education Initiative and Columbia University’s Justice-in-Education Initiative. His other affiliations include the Schomburg Center for Research in Black Culture, Modern Language Association, American Comparative Literature Association, American Folklore Society, and Association for Asian American Studies. If you have any questions about studying the humanities, double-majoring, public writing, editing, or singing on campus, feel free to contact him.