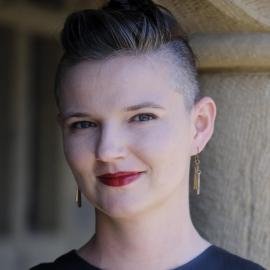 The 20th & 21st Century and Theory & Media Studies colloquia welcome Michaela Bronstein presenting “The Audience of Terror: Political Violence and the Rise of the Art Novel.”

Professor Michaela Bronstein of Stanford University studies the history of the novel, focusing on the experience of reading—both the intimate temporality of the span of time a reader spends immersed in a particular novel, and the longer history of the way books get picked up and repurposed across temporal and national boundaries. Her teaching and research interests range across 20th-century narrative: from text to television, from Anglo-American modernism to contemporary African fiction. Her first book, Out of Context: The Uses of Modernist Fiction, came out from Oxford University Press. It examines the transhistorical uses of modernist literary forms: rather than looking for the political significance of modernist novels in the context in which they were written, she looks at the uses later writers have made of them. She is also under way on a second book project, “Crimes for All Mankind: Revolution and the Modern Novel,” which examines novels about revolutionaries intertextually connected with one another from 19th-century Russia to South Africa and England today.

Publications include work on Joseph Conrad and Ngugi wa Thiong’o in Modern Language Quarterly; on first-time reading in the Journal of Modern Literature, on Conrad and William Faulkner in Essays in Criticism; and on the transition from serial to non-serial storytelling in modernist fiction and contemporary television in the edited collection The Contemporaneity of Modernism. Her latest piece, on Henry James, Ralph Ellison, and James Baldwin, came out in American Literary History and received the American Literature Society’s 1921 Prize. Her next article discusses climate change, the novels of David Mitchell, and the artwork Future Library, and will appear in PMLA in 2019.