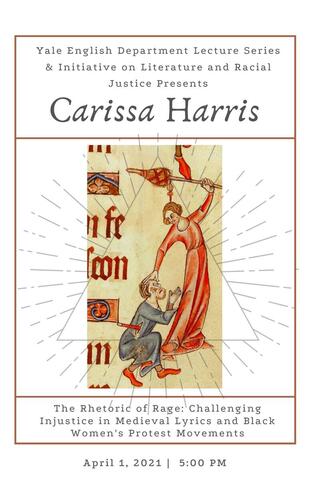 The Department Lecture Series and the Initiative on Literature and Racial Justice present Carissa Harris on April 1, 2021 at 5pm. Her talk is titled:

Carissa M. Harris’s research and teaching focus on gender and sexuality in medieval England and Scotland. She earned her Ph.D. from Northwestern University and her B.A. from Washington University in St. Louis. In 2016, she won Temple’s CLA Distinguished Faculty Teaching Award. Her research has been supported by fellowships from the Ford Foundation, the Woodrow Wilson Foundation, and the Institute for Advanced Study.