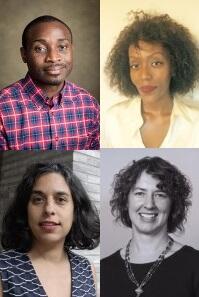 Cajetan Iheka is Associate Professor of English at Yale University, specializing in African literature, ecocriticism, ecomedia, and world literature. He is the author of Naturalizing Africa: Ecological Violence, Agency, and Postcolonial Resistance in African Literature (Cambridge University Press, 2018), winner of the 2019 Ecocriticism Book Award of the Association for the Study of Literature and Environment, and the 2020 First Book Prize of the African Literature Association. His next single-authored book, African Ecomedia: Network Forms, Planetary Politics, is forthcoming from Duke University Press later in 2021. The book positions Africa at the center of discourses on media ecologies, materiality, and infrastructure. Also forthcoming in summer 2021 is an edited volume in the MLA Options for Teaching Series, titled Teaching Postcolonial Environmental Literature and Media. Professor Iheka also coedited African Migration Narratives: Politics, Race, and Space (University of Rochester Press, 2018), and Environmental Transformations, a special issue of African Literature Today. His articles have appeared or are forthcoming in refereed venues such as Interdisciplinary Studies in Literature and Environment, Environmental Ethics, Research in African Literatures, The Cambridge Companion to the Environmental Humanities, and the Oxford Handbook of Nigerian Politics. He currently serves as deputy editor of African Studies Review, the multidisciplinary journal of the African Studies Association.

Axelle Karera  is an assistant professor of philosophy at Emory University. Her work is situated at the intersection of 20th century continental philosophy, black critical theory, contemporary critical theories, and the environmental humanities. In addition to forthcoming work on blackness and ontology, as well as blackness and hospitality, she is currently completing her first monograph titled The Climate of Race: Blackness and the Pitfalls of Anthropocene Ethics, in which she examines the question of relationality in new materialist ontology and speculative realism’s purported return to metaphysics. More importantly, the book’s investigations attempt to discern the ethical crux of critical thought in the age of the Anthropocene in order to attend to its conspicuous - and perhaps even necessary - disavowals on matters pertaining to racial ecocides

Sonya Posmentier is an Associate Professor in the Department of English at New York University, where she teaches African American and Black Diasporic literature and culture, poetry and poetics, and environmental literature. Her first book Cultivation and Catastrophe: The Lyric Ecology of Modern Black Literature was published in 2017 by Johns Hopkins University Press, and is a recipient of the William Sanders Scarborough award from the Modern Language Association. She is at work on a new book, Black Reading, about the intersecting histories of black cultural studies and modern lyric theory, as well as a collection of essays focused on poetry and environmental citizenship and statelessness. Her essays and articles have appeared in The New York Times Book Review, American Literature, American Literary History, Public Books and elsewhere.

Jennifer Wenzel is an Associate Professor jointly appointed in the Department of English and Comparative Literature and the Department of Middle Eastern, South Asian, and African Studies at Columbia. Her book Bulletproof: Afterlives of Anticolonial Prophecy in South Africa and Beyond, was awarded Honorable Mention for the Perkins Prize by the International Society for the Study of Narrative. With Imre Szeman and Patricia Yaeger, she co-edited Fueling Culture: 101 Words for Energy and Environment. Her new book, The Disposition of Nature: Environmental Crisis and World Literature, was shortlisted for the 2020 Book Prize awarded by the Association for the Study of the Arts of the Present (ASAP). Her essays on postcolonial theory, environmental and energy humanities, memory studies, and African and South Asian literatures, have appeared in journals including Alif, Cultural Critique, Modern Fiction Studies, PMLA, Postcolonial Studies, Public Culture, Research in African Literatures, and Resilience. She has held fellowships from the Mellon Foundation, ACLS, NEH, and Princeton University’s Davis Center for Historical Studies. She is currently at work on a new book project, “The Fossil-Fueled Imagination: How (and Why) to Read for Energy.”