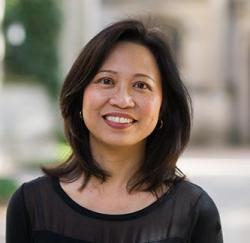 Anne Anlin Cheng is Professor of English and of the Center for African American Studies. She is Director for Program in American Studies and affiliated with Program in Gender and Sexuality Studies and the Committee on Film Studies. Receiving her B.A. in English and Creative Writing at Princeton, her Masters in English and Creative Writing from Stanford University, and her Ph.D. in Comparative Literature from University of California at Berkeley, Cheng is an interdisciplinary scholar who specializes in comparative race studies, aesthetic theory, literary theory, film studies, and psychoanalytic and feminist theories. She works primarily with twentieth-century American literature and visual culture with special focus on Asian American and African American literatures. She is the author of The Melancholy of Race: Assimilation, Psychoanalysis, and Hidden Grief (Oxford University Press), a study of the notion of racial grief at the intersection of culture, history, and law. Her second book Second Skin: Josephine Baker and the Modern Surface, also published by Oxford University Press, tells the story of the unexpected intimacy between the invention of a modernist style and the theatricalization of black skin at the turn of the twentieth century.

Cheng is the founder and organizer of the public conversation series Critical Encounters whose aims are to promote dialogue between art and theory and to encourage cross-disciplinary conversations, all on the shared topic of social justice.