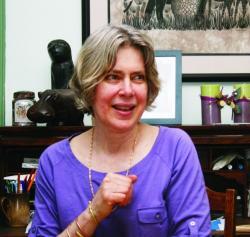 Mary Nyquist is a Professor of English, Comparative Literature, and Literature and Critical Theory at the University of Toronto. Her research is interdisciplinary, involves close textual analysis, and centres primarily on intersections among early modern literature, Euro-colonialism, and political philosophy. For many years she has also been deeply engaged in other areas and historical periods, including the literature and philosophy of revolution (mid-seventeenth century England and the Age of Revolutions, with focus on Haitian Revolution), histories and theories of violence, critical race theory, slavery studies, and early modern, modern, and contemporary poetry.

Awarded the Milton Society’s prestigious title of “Honored Scholar” in 2011 (an achievement award not confined to Milton studies), she recently co-edited, with Feisal Mohamed, Milton and Questions of History: Essays by Canadians Past and Present (University of Toronto, 2012), which won the Irene Samuel prize. She has published essays on Hobbes and Locke that are part of Arbitrary Rule: Slavery, Tyranny, and the Power of Life and Death (Chicago University Press, 2013), which concerns interrelations between transatlantic slavery and the political “slavery” that is central to ancient Graeco-Roman, early modern, and enlightenment political discourses. She continues to work on Hobbes, and currently have three projects on the go: a monograph on embodied servility in ‘Western’ discourses of liberty; one on animality, barbarism and “rights” in early modern and enlightenment colonialist and emancipatory projects; and one on barbarism and tyranny in Shakespeare.

Outside the academy, she has done activist work in the areas of racialized and gendered violence, and has published poetry in several Canadian journals, including The Malahat Review.