History of the Book: Tiffany Stern and David Scott Kastan 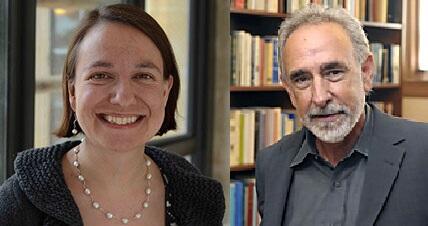 Tiffany Stern’s (Professor of Shakespeare and Early Modern Drama, University of Birmingham) work combines literary criticism, theatre and book history and editing from the sixteenth to the eighteenth centuries. She is fascinated by the theatrical contexts that brought about plays by Shakespeare and others; several of her books and articles are on the theatrical documents put together by authors and theatrical personnel in the process of writing and learning a play: actors’ parts (the documents consisting of cues and speeches from which actors learned their roles), prologues, epilogues, songs, letters, arguments, backstage plots, plot scenarios and other separate stage documents. As General Editor of the New Mermaids play series, and Arden Shakespeare 4, She is also interested in the way plays were manifested in manuscript and print, and in how to rethink editing for the digital age. Her current projects are a book on early modern theatre and popular entertainment, Playing Fair, exploring the cultural exchanges between playhouses and fairgrounds, a book on Shakespeare Beyond Performance, looking at the theatrical documents produced in the light of a play’s performance – ballads, chapbooks, commonplace books, ‘noted’ texts – and an edition of Shakespeare’s Tempest.

David Scott Kastan (George M. Bodman Professor of English, Yale University) Although he teaches broadly across the field of Renaissance literature, his primary intellectual concern is with the relations of literature and history in early modern England, considered from a variety of perspectives. Increasingly this interest has focused on the production, transmission, and reception of texts (a focus that he likes to think of as “the new boredom”). He is one of the general editors of the Arden Shakespeare, for which he edited 1 Henry IV, and he edited Milton’s Paradise Lost and Marlowe’s Doctor Faustus  (A and B text) for other publishers. He was the co-editor of the Bantam Shakespeare, and was the series editor for the Barnes and Noble Shakespeare. In addition, he edited The Oxford Encyclopedia of British Literature, as well as (with John Cox), A New History of Early English Drama and (with Peter Stallybrass) Staging the Renaissance. Among his scholarly publications are Shakespeare and the Shapes of Time, Shakespeare after Theory, Shakespeare and the Book, and A Will to Believe: Shakespeare and Religion. A new book, entitled On Color, written with the painter Stephen Farthing, was published by Yale University Press in 2018, and he is now completing Book Cases: Object Lessons in the History of the Book to be published by Princeton University Press.