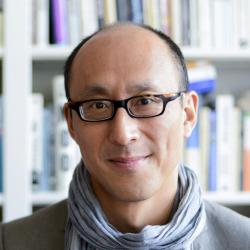 David L. Eng is the Richard L. Fisher Professor of English as well as Graduate Chair of the English Department at the University of Pennsylvania. He is also Professor in the Program in Asian American Studies, the Program in Comparative Literature & Literary Theory, and the Program in Gender, Sexuality & Women’s Studies. His areas of specialization include American literature, Asian American studies, Asian diaspora, critical race theory, psychoanalysis, queer studies, gender studies, and visual culture.

Eng is author with Shinhee Han of “A Dialogue on Racial Melancholia and Racial Dissociation: On the Social and Psychic Lives of Asian Americans,” “The Feeling of Kinship: Queer Liberalism and the Racialization of Intimacy,” and “Racial Castration: Managing Masculinity in Asian America.” He is co-editor with David Kazanjian of “Loss: The Politics of Mourning” and with Alice Y. Hom of “Q & A: Queer in Asian America” (winner of a Lambda Literary Award and Association of Asian American Studies Book Award). His current book project, “Reparations and the Human,” investigates the relationship between political and psychic genealogies of reparation in Cold War Asia.