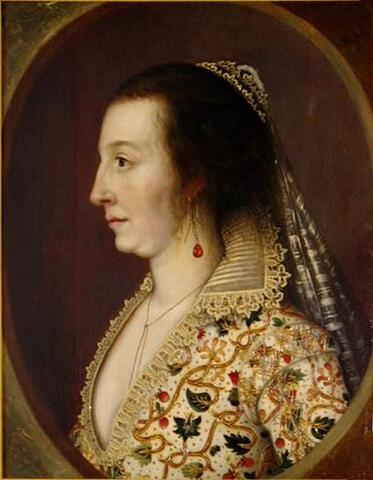 Please join the Yale English Renaissance Colloquium for an event co-sponsored with the Program in Early Modern Studies and the Near Eastern Languages and Civilizations Department on Friday, December 2 at 4pm in HQ 276:

Bernadette Andrea, Professor of Literary and Cultural Studies in the Department of English at the University of California, Santa Barbara, and core faculty in UCSB’s Center for Middle East Studies, will be presenting a talk:

The Portrait of a Lady from the Islamic World in Early Modern England: “Teresia, Countess Shirley,” c. 1611–13

Bernadette Andrea is Professor of Literary and Cultural Studies in the Department of English at the University of California, Santa Barbara. She is also a core faculty in the Center for Middle East Studies, an affiliate faculty in the Comparative Literature Program, and an affiliate faculty in the Department of Feminist Studies. She received her PhD in English Language and Literature from Cornell University, where she specialized in early modern women’s writing and studied Arabic in the department of Near Eastern Studies. She is the author of The Lives of Girls and Women from the Islamic World in Early Modern British Literature and Culture (University of Toronto Press, 2017) and Women and Islam in Early Modern English Literature (Cambridge University Press, 2007). She edited and introduced English Women Staging Islam, 1696–1707 (University of Toronto, Centre for Reformation and Renaissance Studies, 2012) for the series “The Other Voice in Early Modern Europe.” Her co-edited collections include Travel and Travail: Early Modern Women, English Drama, and the Wider World, with Patricia Akhimie (University of Nebraska Press, 2019), and Early Modern England and Islamic Worlds, with Linda McJannet (Palgrave Macmillan, 2011). Her articles and book chapters on contemporary women writers from Turkey, Egypt, Algeria, and Morocco appear in journals such as HAWWA: Journal of Women of the Middle East and the Islamic World and collections such as Arab Women’s Lives Retold: Exploring Identity Through Writing. She currently serves as a co-editor, with Julie Campbell and Allyson Poska, of Early Modern Women: An Interdisciplinary Journal, and as the President of the Shakespeare Association of America.