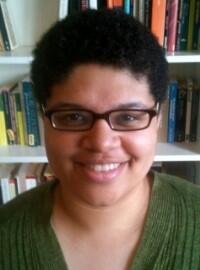 Patricia Akhimie is Assistant Professor of English at Rutgers University-Newark, where she teaches Shakespeare, Renaissance drama, and early modern women’s travel writing. She is the author of Shakespeare and the Cultivation of Difference: Race and Conduct in the Early Modern World (Routledge, forthcoming 2018), and is co-editor, with Bernadette Andrea of Traveling/Travailing Women: Early Modern England and the Wider World (U of Nebraska, forthcoming 2018). Prof. Akhimie will speak to us about her forthcoming book, which reveals the relationship between racial discrimination and the struggle for upward social mobility in the early modern world. Reading Shakespeare’s plays alongside contemporaneous conduct literature, her work demonstrates the ways that the pursuit of personal improvement was accomplished by the simultaneous stigmatization of particular kinds of difference. The widespread belief that one could better, or cultivate oneself through proper conduct was coupled with an equally widespread belief that certain markers, including but not limited to “blackness,” indicated an inability to conduct oneself properly, laying the foundation for what we now call “racism.” By approaching race through the discourse of conduct, this volume not only expose the epistemic violence toward stigmatized others that lies at the heart of self-cultivation, but also contributes to the broader definition of race that has emerged in recent studies of cross-cultural encounter, colonialism and the global early modern world.