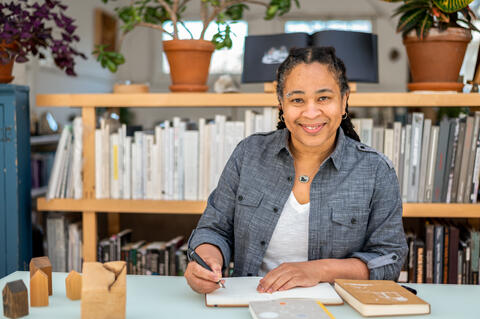 The third in a weekly series on Wednesdays at 12 noon ET featuring 2021 Windham-Campbell Prize Recipients in a 30-40 minute pre-recorded streaming video presentation featuring a live chat box, followed by a Zoom Q&A with that week’s featured writer. Future sessions include:
10/6 – Natalie Scenters-Zapico
10/12 – Canisia Lubrin
10/20 – Nathan Alan Davis
10/27 – Kate Briggs
11/3 – Dionne Brand
11/10 – The Windham-Campbell Lecture by US Poet Laureate Joy Harjo.
A native of Atlanta, Georgia, Renee Gladman is the author of numerous books of fiction, nonfiction, and poetry. At the core of her work is a critically acclaimed cycle of novels about the imagined city-state of Ravicka and its inhabitants: Event Factory (2010), The Ravickians (2011), Ana Patova Crosses a Bridge (2013), and Houses of Ravicka (2017). Like Italo Calvino’s Invisible Cities and Samuel R. Delany’s Dhalgren, Gladman’s Ravicka novels open onto a world both like and unlike our own, presenting a surrealistic vista of Escher-like architectures that is strange, vivid, and uncanny yet that is always lucid and, on occasion, piercingly familiar. In Ravicka, we are all dislocated and queer, strangers in a strange land—alien to others and, even, to ourselves. Gladman’s work, both poetry and prose, bears the mark of a singular and vertiginous authorial intelligence, a fierce and careful attention to language, and a willingness to take formal and linguistic risks in form, language, and subject. She has also published two art monographs, One Long Black Sentence (2020), indexed by Fred Moten, and Prose Architectures (2017). A graduate of Vassar College and New College of California, as well as the recipient of fellowships, grants, and residencies from the Radcliffe Institute for Advanced Study (2015) and the Lannan Foundation (2017), among other institutions, Gladman makes her home in New England.
Visit windhamcampbell.org for more information about Renee and the other 2021 recipients!