Home » Calendar » Roundtable on Emily Ogden's "Credulity: A Cultural History of US Mesmerism"

Roundtable on Emily Ogden’s “Credulity: A Cultural History of US Mesmerism” 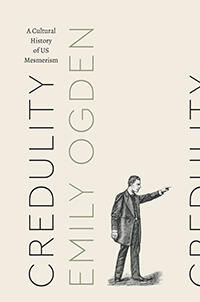 The Americanist and 18th & 19th Century colloquia and the Department of Religious Studies present a roundatble discussion on Emily Ogden’s Credultiy: A Cultural History of US Mesmerism. Featuring speakers Emily Ogden, Tracy Fessenden, and Caleb Smith.

Emily Ogden (Assistant Professor of English, University of Virginia) is the author of Credulity: A Cultural History of US Mesmerism (University of Chicago Press, 2018). She has written for Critical Inquiry, The New York Times, American Literature, J19, Lapham’s Quarterly Online, Early American Literature, and Public Books. Ogden is a columnist at 3 Quarks Daily with installments appearing every eighth week starting October 29, 2018. The Mellon Foundation, the American Philosophical Society, and other granting organizations have supported her work.

Tracy Fessenden (Steve and Margaret Foster Professor of Religious Studies, Arizona State University) is the interim Director of the School of Historical, Philosophical, and Religious Studies. Prior to receiving her doctorate in religious studies from the University of Virginia, she studied literature at Yale University. Her work focuses on religion and American literature and the arts; gender, race, and sexuality in American religious history; and the relationship between religion and the secular in American law and public life. She is the author of  Religion Around Billie Holiday (Penn State UP) and Culture and Redemption: Religion, the Secular, and American Literature (Princeton UP, 2007; paperback 2013), co-editor of The Puritan Origins of American Sex: Religion, Sexuality and National Identity in American Literature (Routledge, 2001) and Religion, the Secular, and the Politics of Sexual Difference (Columbia UP, 2013), and general editor of the “North American Religions“ series at New York University Press. Her recent articles and essays have appeared in American Literary History, Religion & Politics,  Religion, Early American Literature, New Literary History, Church History: Studies in Christianity and Culture,and in edited collections and anthologies. An affiliate of the Center for the Study of Religion and Conflict, Professor Fessenden has been a co-principal investigator or project team member on numerous research projects, including Public Religion, the Secular, and Democracy and Teaching and Talking about Religion in Public,supported by the Ford Foundation, and Religion and International Affairs: Through the Prism of Rights and Gender, supported by the Luce Foundation.

Caleb Smith (Professor of English, Yale University) teaches American literature, very broadly defined, ranging from the early national period through the twentieth century. His courses include introductory sections and lectures in American literary history, a senior seminar on William Faulkner, and a graduate seminar on literature and power. In 2007 he worked with Professor Caryl Phillips to develop “The Literature of the Middle Passage,” a course on literature and the Atlantic slave trade that included a ten-day trip to Ghana. His research explores the dream-life of power, or the relations between social imaginaries and legal institutions. His first book, The Prison and the American Imagination (Yale UP, 2009), is a cultural history of the penitentiary system. Tracing a genealogy of mass incarceration to the penal reforms of the early nineteenth century, he shows how the prison came to be imagined as a scene of ceremonial death and rebirth. In a second book, The Oracle and the Curse (Harvard UP, 2013), he turns from sites of punishment to scenes of judgment. He tells the stories of dissenters, exhorters, and self-styled martyrs who made their claims to justice by invoking a “higher law.” The Oracle and the Curse argues that the formal secularization of the legal system allowed for new kinds of protest and militancy. Along the way, it considers how early American literature defined itself against the law’s public sphere. His new project is an edition of “The Life and the Adventures of a Haunted Convict,” an 1858 memoir by Austin Reed, a free black man who spent much of his life in New York’s Auburn State Prison, to be published by Random House in 2016.