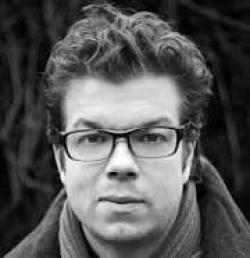 Lerner is the author of several full-length poetry collections, including Mean Free Path (2010); Angle of Yaw(2006), which was a finalist for the National Book Award and the Northern California Book Award. His sonnet sequence, The Lichtenberg Figures (2004), won the Hayden Carruth Award, was chosen by Library Journal as one of the year’s 12 best poetry books, and was a Lannan Literary Selection. His poetry has also been included in the anthologies Best American Poetry, New Voices (2008), and 12x12: Conversations in Poetry and Poetics (2009). His novels include Leaving the Atocha Station (2011) and and 10:04 (2014).

Ranging from sonnets to extended, collage-based prose poems, Lerner’s work often uses scientific structures to explore the relationship between language, form, and movement. In a 2004 interview with Kent Johnson forJacket magazine, Lerner described that collection as focused on “the commercialization of public space and speech. I’m also interested in the ways that technologies of viewing—aerial photography in particular—replace the God-term with a camera that feeds our spectacular culture an image of itself.”

Ben Lerner earned a BA in political science and an MFA in creative writing from Brown University. He has served as a Fulbright scholar in Madrid and as a Guggenheim fellow. In 2015 he was awarded a prestigious MacArthur fellowship. In 2002, Lerner cofounded, with Deb Klowden, No: a journal of the arts, and he has also served as the poetry editor for Critical Quarterly. He has taught at the University of Pittsburgh and California College of the Arts, and he currently teaches at Brooklyn College.