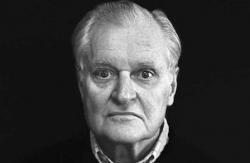 John Ashbery is recognized as one of the greatest contemporary American poets. He has won nearly every major American award for poetry, including the Pulitzer Prize, the National Book Award, the Yale Younger Poets Prize, the Bollingen Prize, the Ruth Lilly Poetry Prize, the Griffin International Award, and a MacArthur “Genius” Grant. Ashbery’s poetry challenges its readers to discard all presumptions about the aims, themes, and stylistic scaffolding of verse in favor of a literature that reflects upon the limits of language and the volatility of consciousness. In the New Criterion, William Logan noted: “Few poets have so cleverly manipulated, or just plain tortured, our soiled desire for meaning. [Ashbery] reminds us that most poets who give us meaning don’t know what they’re talking about.” The New York Times Book Review essayist Stephen Koch characterized Ashbery’s voice as “a hushed, simultaneously incomprehensible and intelligent whisper with a weird pulsating rhythm that fluctuates like a wave between peaks of sharp clarity and watery droughts of obscurity and languor.”

In addition to his numerous awards, John Ashbery was the poet laureate of New York State from 2001 to 2003. He also served as chancellor of the Academy of American Poets and has been the Charles P. Stevenson, Jr., Professor of Languages and Literature at Bard College.