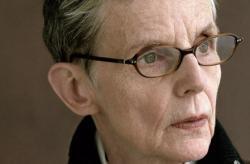 One of the preeminent poets of her generation, Susan Howe is known for innovative verse that crosses genres and disciplines in its theoretical underpinnings and approach to history. Layered and allusive, her work draws on early American history and primary documents, weaving quotation and image into poems that often revise standard typography. Howe’s interest in the visual possibilities of language can be traced back to her initial interest in painting: Howe earned a degree from the Boston Museum School of Fine Arts in 1961, and enjoyed some success with gallery shows in New York.

Her work is often grouped with Language writing for its deconstructionist attitude toward language, and disregard for conventional literary formalities. Howe has sometimes placed her verse upside-down, or crossed out parts of it, or let the words overlap one another, characteristics that may have to do with her early training as a visual artist. Some critics have likened her poems to paintings on the page, the large gaps between words providing white spaces that are meant to convey as much meaning as the words themselves. Her work is also marked by plays upon words that possess phonetic similarities.

An idiosyncratic, important, and increasingly influential American poet, Howe has received numerous honors and awards for her work, including two American Book Awards from the Before Columbus Foundation and a Guggenheim fellowship; she has been a distinguished fellow at the Stanford Institute for Humanities, as well as the Anna-Maria Kellen Fellow at the American Academy in Berlin. She taught for many years at the State University of New York-Buffalo, where she held the Samuel P. Capen Chair of Poetry and the Humanities. In 2011, Susan Howe was awarded the Bollingen Prize in American Poetry from Yale University.