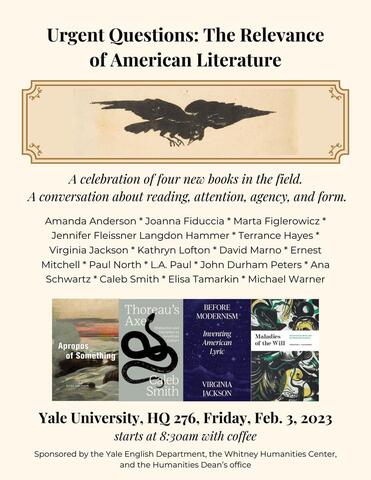 Please join the English Department, Whitney Humanities Center, and the Humanities Dean’s Office for a celebration of four new books in the field of American Literature with a conversation about reading, attention, agency, and form. Please see the event schedule for a complete list of panelists.

Elisa Tamarkin, Apropos of Something: A History of Relevance and Irrelevance

Elisa Tamarkin is Professor of English at the University of California, Berkeley. She is the author of Anglophilia: Deference, Devotion, and Antebellum America and Apropos of Something: A History of Irrelevance and Relevance, both published by the University of Chicago Press. She is currently working on a book on Herman Melville and another on the last days of the Vietnam War.

Jennifer Fleissner, Maladies of the Will: The American Novel and the Modernity Problem

Jennifer L. Fleissner is Associate Professor of English at Indiana University, Bloomington. She is the author of Women, Compulsion, Modernity: The Moment of American Naturalism and Maladies of the Will: The American Novel and the Modernity Problem, along with numerous essays published in such journals as ELH, Critical Inquiry, American Literary History, American Literature, NOVEL, J19, differences, and Studies in Romanticism, as well as in such collections as The Cambridge History of the American Novel.

Virginia Jackson is UCI Endowed Chair in Rhetoric at UC Irvine.  Her most recent book is Before Modernism: Inventing American Lyric (Princeton, 2023).

Caleb Smith is professor of English and American Studies at Yale University, where he teaches courses in American literature, cultural history, and critical theory. His books include The Prison and the American Imagination (Yale University Press, 2009); The Oracle and the Curse (Harvard University Press, 2013); and the first published edition Austin Reed’s 1858 prison memoir, The Life and the Adventures of a Haunted Convict (Random House, 2016). His latest, Thoreau’s Axe: Distraction and Discipline in American Culture, appears from Princeton University Press in January 2023.