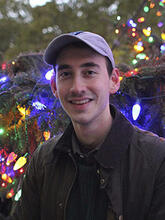 Orbey, of Acton, Massachusetts, is a double major in computer science and English language and literature. As a 3-year-old, he witnessed his father’s murder in Ankara, Turkey, an experience that ultimately led to his current book project, which melds memoir, history, and contemporary reporting to create a portrait of his father and his father’s killer. Orbey has won many Yale literature prizes, for writing in both English and French, is a regular contributor to the New Yorker, and has worked as a software engineer at Microsoft. His passion is to produce art that extracts compassion from the trials of trauma. At Oxford, Orbey plans to pursue master’s degrees in global and imperial history and in world literatures in English.