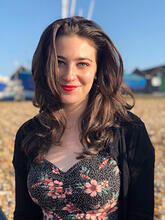 Eve Houghton is a PhD candidate in English at Yale University. Her research is broadly focused on literature and social life in seventeenth-century England, with a focus on drama. Her dissertation, “The Awkward Age,” traces the relationship between early modern awkwardness and emerging ideas of dramatic “character,” in the sense of the eccentric, distinctive, and singular. Other research interests include 20th-century collecting histories, book history and textual studies, gender and sexuality, and affect theory. Eve has also curated several rare book exhibits at Yale, including a 2020 Beinecke Library exhibit on “early modern memes” and English manuscript culture, and currently serves as Assistant Librarian at the Elizabethan Club. She received her BA in English from Yale University and an MPhil in Renaissance Literature from the University of Cambridge.