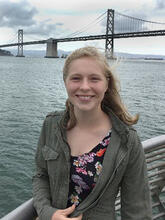 Lily Moore-Eissenberg, from Harvard, Massachusetts, is completing double majors in English and Philosophy. As a writer and philosopher, her work centers on analyzing the exploitation of marginalized groups, including issues of gender, migration, and family. She is an award-winning journalist and was co-editor-in-chief of Yale’s political magazine, where she founded the university’s only outlet for public philosophy. As an editorial intern at the Texas Monthly, Moore-Eissenberg covered this summer’s mass shooting in El Paso, Texas. She plans a career as a philosophy professor and staff writer at a long-form magazine. At Oxford, she will pursue a B.Phil. in philosophy.