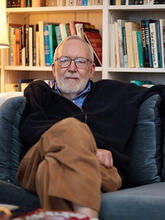 On the death of J. Hillis Miller at 92, we offer these few remarks in his memory:

Hillis began his career at Johns Hopkins (1952-72), where he worked closely with colleague Georges Poulet to develop a “phenomenological criticism” focused on “our consciousness of another consciousness,” especially—in Miller’s case—ranging through the canon of Victorian fiction, although his still-influential Poets of Reality (1965), concerning modern writers, belongs to that period.

His arrival at Yale in 1972 marks a watershed in his own career, as he participated in the “linguistic turn” toward deconstruction for which Yale was known over the next fifteen years. He joined forces with Paul de Man and the annual visiting professor Jacques Derrida in particular, forming a looser but congenially avant-garde alliance with Harold Bloom, Geoffrey Hartman and the followers and students of those luminaries–an intellectual community, holding together viewpoints more diverse than was generally recognized, that was broadcast as a single school of thought, rightly or wrongly, in a book called Deconstruction and Criticism (1979), prefaced by Hartman.

Miller’s best-known article, “The Critic as Host,” published in response to “The Deconstructive Angel,” by M. H. Abrams, appeared in 1976. Toward the end of his time at Yale three books came out in rapid succession, the first two being Fiction and Repetition and The Linguistic Moment (again about poetry, Wordsworth to Stevens). The third of these, The Lesson of Paul de Man (1985), responded both to the death of de Man and to the controversy about de Man’s wartime journalism that had preceded it. To this period too belonged Miller’s crucial contributions to the topic he called “the ethics of reading.” In 1986, still amid the swirl of events and opinions following de Man’s death, Miller departed for UC Irvine, where he finished his career, publishing many more important books, engaging in particular the ethical turn of the later Derrida, who visited Irvine annually after Hillis went there.

The critical controversies of that period at Yale were for the most part located in Humanities, Comparative Literature, and French. Hillis, however, was a truly admirable member of our department among his many other commitments. He was always fair-minded, genial to all (those of us who knew him remember his booming, cheerful voice), collegial in the most community-spirited ways, and a writer of prose as lucid and plain-spoken as that of anyone among us at that time, even when he was expounding ideas more often couched by others in prose both gnomic and oracular.  He will be missed.