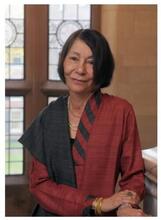 It is with great sadness that we announce the passing of Sara Suleri Goodyear, 68, in Bellingham WA, on March 20th, 2022. Born in Karachi, Pakistan, Sara was the daughter of Z.A. Suleri, a prominent journalist, and Mair (née Jones) Suleri, a Professor of English at Punjab University in Lahore. She was predeceased by her husband, Austin Goodyear, and by her older siblings, Nuzhat Akhund, Ifat Mawaz, and Shahid Suleri, and is survived by her younger siblings, Tillat Khalid of Vancouver, BC, and Irfan Suleri of Birmingham, UK, and by many nieces, nephews, and their children.

Sara graduated from Kinnaird College, Lahore, received a Master’s Degree in English Literature from Punjab University, and earned her Ph.D. in English from Indiana University. She taught at Williams College and, for most of her career, at Yale University. She was a founding editor of the Yale Journal of Criticism, and wrote two seminal texts of postcolonial studies, Meatless Days, and The Rhetoric of English India. Along with numerous scholarly articles, Sara wrote a memoir based on her father’s illustrious and turbulent journalistic career, Boys Will Be Boys. Recently, she and Azra Raza co-wrote A Tribute to Ghalib: Twenty-One Ghazals Reinterpreted.

A memorial service will be held at a later date.