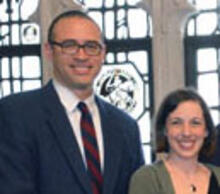 As reported in Yale News, Catherine Nicholson was awarded the Sarai Ribicoff ’75 Award for Teaching Excellence in Yale College at a campus ceremony on April 27th along with five other Yale faculty members who each received an award for outstanding teaching.

The teachers were nominated by their students for the awards, which were presented by Yale College Dean Jonathan Holloway. The Teaching, Learning, and Advising Committee selected the winners from among the nominees.

Holloway said of Nicholson, “Your students repeatedly describe you as ‘passionate,’ ‘enthusiastic,’ and ‘energetic.’ One of them noted that you are a ‘deft discussion leader who manages to prompt interesting and productive conversation without being overbearing.’ Another student said: ‘It is rare to feel both unconditionally supported and pushed to the limits of my abilities as a writer and a scholar.’ Another described taking your courses this way: ‘I left every class feeling as though I had climbed a mountain.’ Your love for Renaissance literature and ability to transmit that love to your students is summarized by this student’s comment: ‘She says that she could read Spenser forever, and I not only believe it, but am at least momentarily convinced that I could, too.’”