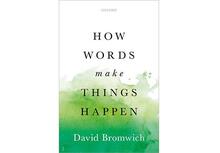 Sooner or later, our words take on meanings other than we intended. How Words Make Things Happen suggests that the conventional idea of persuasive rhetoric (which assumes a speaker’s control of calculated effects) and the modern idea of literary autonomy (which assumes that ‘poetry makes nothing happen’) together have produced a misleading account of the relations between words and human action. Words do make things happen. But they cannot be counted on to produce the result they intend.

This volume studies examples from a range of speakers and writers and offers close readings of their words. Chapter 1 considers the theory of speech-acts propounded by J.L. Austin. ‘Speakers Who Convince Themselves’ is the subject of chapter 2, which interprets two soliloquies by Shakespeare’s characters and two by Milton’s Satan. The oratory of Burke and Lincoln come in for extended treatment in chapter 3, while chapter 4 looks at the rival tendencies of moral suasion and aestheticism in the poetry of Yeats and Auden. The final chapter, a cause of controversy when first published in the London Review of Books, supports a policy of unrestricted free speech against contemporary proposals of censorship. Since we cannot know what our own words are going to do, we have no standing to justify the banishment of one set of words in favour of another.