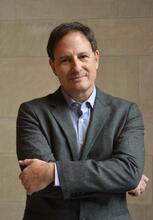 Langdon Hammer, newly named as the Niel Gray Jr. Professor of English, is a literary scholar, biographer, and critic who studies modern and contemporary poetry and poetics.

Hammer is the author of “James Merrill: Life and Art,” an acclaimed biography of the American poet, and “Hart Crane and Allen Tate: Janus-Faced Modernism.” He edited two volumes for the Library of America: “The Collected Poems of May Swenson,” the first collected edition of the author’s work, and “Hart Crane: Complete Poetry and Selected Letters.” He is also the editor of “O My Land, My Friends: The Selected Letters of Hart Crane.” Hammer’s works-in-progress include a critical biography of Elizabeth Bishop and “The Selected Letters of James Merrill.” For “The Oxford History of Poetry in English,” an 18-volume work, he is the coordinating editor for three volumes on American poetry and the volume editor for “American Poetry Since 1939.”

Since 2004 Hammer has served as poetry editor of the journal American Scholar, to which he contributed short introductions to the work of many distinguished poets including Paul Muldoon, Kevin Young, Louise Glück, Kay Ryan, John Ashbery, Gary Snyder, Maureen N. McLane, and Carl Phillips. He has published numerous essays on 20th- and 21st-century poets, and his book reviews have appeared in the New York Times and other newspapers. He has received fellowships from the Guggenheim Foundation, the Leon Levy Center for Biography at the CUNY Graduate Center, and the Bogliasco Foundation.

Hammer earned his B.A. (1980) and a Ph.D. in English language and literature (1989) from Yale. He joined the university faculty in 1987 as assistant professor of English and became a full professor in 2001. He has served as chair or acting chair of the Department of English on five separate occasions, and is currently chair. Hammer’s undergraduate courses include “Major English Poets,” a seminar on “The Life of the Author,” and the lecture “Poetry Since 1950.” His lectures on modern poetry were recorded and transcribed in 2007 as a pilot course in Yale’s Open Access Video Project. Hammer has led many seminars for the Yale New Haven Teachers Institute and the YNHTI National Initiative. In 2011, he was honored for his teaching with Yale’s Graduate Student Mentor Award in the Humanities.

The endowed chair is widely recognized as the most prestigious honor a university can bestow on an accomplished faculty member, and once appointed, a professor retains that position for the remainder of his or her career at Yale.