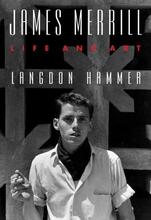 Congratulations to Langdon Hammer, Niel Gray, Jr. Professor of English and Department Chair, who has won the 2016 Lambda Literary Award for Gay Memoir/Biography for his James Merrill: Life and Art (Knopf, 2015).  The book was also a Finalist for the Poetry Foundation Pegasus Award for Criticism 2015 and named a “Best Book of 2015” by the New Yorker, New York Times, and Times Literary Supplement.