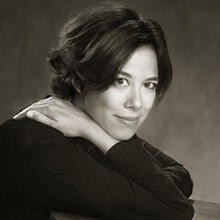 Susan Choi was born in South Bend, Ind., and raised there and in Houston, Texas. She studied literature at Yale University and writing at Cornell University, and worked for several years as a fact-checker for The New Yorker. Her first novel, The Foreign Student, won the Asian-American Literary Award for fiction, and her second novel, American Woman, was a finalist for the 2004 Pulitzer Prize. With David Remnick she co-edited the anthology Wonderful Town: New York Stories from The New Yorker. Her third novel, A Person of Interest, was a finalist for the 2009 PEN/Faulkner Award. In 2010 she was named the inaugural recipient of the PEN/W.G. Sebald Award. A recipient of fellowships from the National Endowment for the Arts and the Guggenheim Foundation, she lives in Brooklyn, N.Y., with her husband, Pete Wells, and their sons.  Her website is accessible here: http://www.susanchoi.com/

At Yale, she will be teaching a range of fiction workshops as well as Introduction to Creative Writing (ENGL 123).