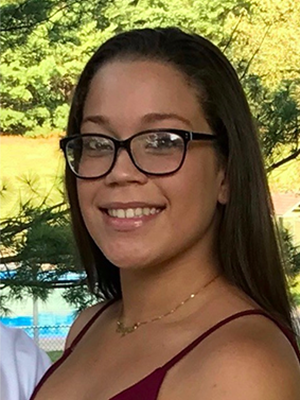 Alexus Coney (she/her) was born in Waterbury and hails from Naugatuck, Connecticut. She enjoys Marvel, Taco Bell, and Broadway theater. On campus, she’s very involved in the theater community as a stage manager, which is by far her favorite all-consuming activity (/more like a job) at Yale — over the summer, she had the incredible opportunity of stage managing the first show of the Yale Summer Cabaret (“Verano”) season with the Yale School of Drama. She is also engaged administratively as managing director of Heritage Theater Ensemble (Yale’s premiere Black theater group, founded in 1979 by Angela Bassett ’80 DRA ‘83) and former Vice President of the Yale Dramatic Association.

Alexus is currently one of three co-chairs for the Tsai Center for Innovative Thinking (Tsai CITY) student advisory board, and also supervises the social media team for the Yale Alumni Association initiative Careers, Life, and Yale. Finally, Alexus is a proud Spring 2019 initiate of the Pi Alpha Chapter of Delta Sigma Theta Sorority, Incorporated. In her spare time, she is a staff writer for the Yale Daily News WEEKEND and Down (Defining Our World Now) Magazine, specializing in theater reviews.

Now a senior in Benjamin Franklin College, Alexus has very likely taken more African-American Studies classes than English over the past three years, and she plans to write her thesis on Black literature. She is looking forward to being a peer mentor this semester and would be happy to chat about the intersections of literature, performance art, history, and culture.