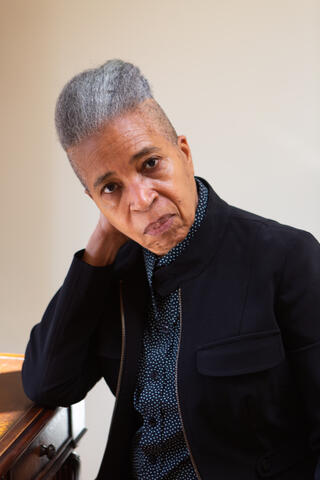 The eighth in a weekly series on Wednesdays at 12 noon ET featuring 2021 Windham-Campbell Prize Recipients in a 30-40 minute pre-recorded streaming video presentation featuring a live chat box, followed by a Zoom Q&A with that week’s featured writer. Future sessions include:
11/10 – The Windham-Campbell Lecture by US Poet Laureate Joy Harjo.
Dionne Brand is a novelist, poet, and essayist. The third Poet Laureate of Toronto (2009-2012), Brand was born in Guayaguayare, Trinidad and moved to Toronto in 1970. Aesthetically and politically radical, Brand’s work has made her a central figure in both world and Canadian literature, earning her many awards and honors, including the Governor General’s Award for Poetry (1997), the Griffin Poetry Prize (2011), the Toronto Book Award (2006, 2019), the Trillium Book Award (1997, 2019), and the OCM Bocas Prize for Caribbean Fiction (2019). Theory (2018), her most recent novel, exhibits the formal complexity and daring of all of her work; the novel feels no need to declare race and gender and instead situates the narrator fully in her intellectual and social worlds. The book centers on a narrator named Teoria who is trying to complete a doctoral dissertation of vaunting ambition. “My aim at the time,” she says, “was to write the bomb of a thesis that would blow up the buildings,” her research exploding the insistently white, straight, and male institutions of academia. The narrator, comically and perhaps inevitably, fails at such revolutionary goals, distracted by a series of lovers and undone by her own inconsistencies. Funny, wild, and completely lacking in pretension, Theory takes huge formal risks, reimagining the novel of ideas for our own moment, challenging and enchanting the reader at the same time. Brand is the recipient of six honorary doctorates and was poetry editor at McClelland & Stewart (Penguin Random House Canada) from 2017-2021. She was invested as a member of the Order of Canada in 2017.
Visit windhamcampbell.org for more information about Dionne and the other 2021 recipients!