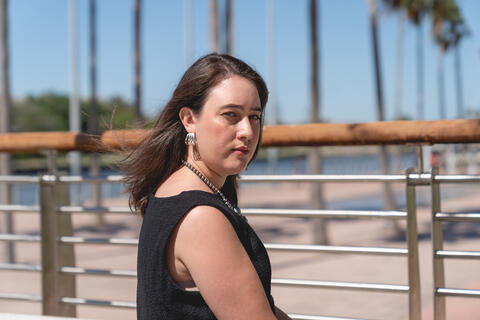 The fourth in a weekly series on Wednesdays at 12 noon ET featuring 2021 Windham-Campbell Prize Recipients in a 30-40 minute pre-recorded streaming video presentation featuring a live chat box, followed by a Zoom Q&A with that week’s featured writer. Future sessions include:
10/13 – Canisia Lubrin
10/20 – Nathan Alan Davis
10/27 – Kate Briggs
11/3 – Dionne Brand
11/10 – The Windham-Campbell Lecture by US Poet Laureate Joy Harjo.
From the sister cities of El Paso, Texas and Ciudad Juárez, Chihuahua, Mexico, Natalie Scenters-Zapico has published two collections of poetry, The Verging Cities (2016), which won the PEN/Joyce Osterweil Award in Poetry (2016), and Lima::Limon (2019), a finalist for the Griffin Poetry Prize (2020) and the Kingsley Tufts Poetry Award (2020). Scenters-Zapico works at the borders, exploring the territory between the United States and Mexico, English and Spanish, the masculine and the feminine, the psychological and the physical, the violent and the tender. In her poems, this in-between space becomes a site of aesthetic power and possibility, even as it remains a zone of danger, where the self might be lost or violently transformed. Images of the dead haunt Scenters-Zapico’s writing: an archaeologist hunting for fossils instead finds a young woman, “her face already / bone. Her body, scattered”; a speaker laments “the boy I love gone missing, his father found with no teeth / In an abandoned car.” And yet for Scenters-Zapico death is also another border, a space both real and imagined where beauty and terror feel equally at home. A graduate of the University of Texas at El Paso and the University of New Mexico, she has published poems in The Believer, Gulf Coast, Poetry, and Tin House, among other places.
Visit windhamcampbell.org for more information about Natalie and the other 2021 recipients!