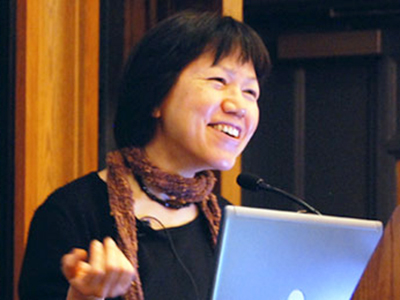 Wai Chee Dimock writes about public health, climate change, and indigenous communities, focusing on the symbiotic relation between humans and nonhumans.  Now a researcher at the Harvard University Center for the Environment, her essays have appeared in Artforum, Chronicle of Higher Education,  Los Angeles Review of Books, New York Times,  New Yorker, and Scientific American.

Dimock is working on a new book, “Microbes and Machines: Surviving Pandemics and Climate Change with Nonhuman Companions.”  Her Weak Planet was published in 2020 by the University of Chicago Press.  Other books include Through Other Continents: American Literature Across Deep Time (2006);  Shades of the Planet (2007); and a team-edited anthology, American Literature in the World: Anne Bradstreet to Octavia Butler ( 2017).  Her 1996 book, Residues of Justice: Literature, Law, Philosophy, was reissued in a new edition in 2021.

Outside Yale, Dimock was a consultant for “Invitation to World Literature,” a 13-part series produced by WGBH and aired on PBS stations in the fall of 2010.  A related Facebook forum, “Rethinking World Literature,” is still ongoing.

“Can NASA Help Save the Planet?  Yes, with Indigenous Partners,” The Hill, November 9, 2021

”Wai Chee Dimock on Living with Risk,” Artforum May 2020.

“Languages in the Time of Corona,” PMLA, Editor’s Column, October 2020.

Shades of the Planet: American Literature as World Literature, co-edited with Lawrence Buell (Princeton UP, 2007)

Through Other Continents: American Literature across Deep Time (Princeton UP, 2006)

Residues of Justice: Literature, Law, Philosophy (U of California P, 1996)

Empire for Liberty: Melville and the Poetics of Individualism (Princeton UP, 1989)

American Literature in the World: An Anthology from Anne Bradstreet to Octavia Butler

Through Other Continents: American Literature Across Deep Time

Shades of the Planet: American Literature as World Literature