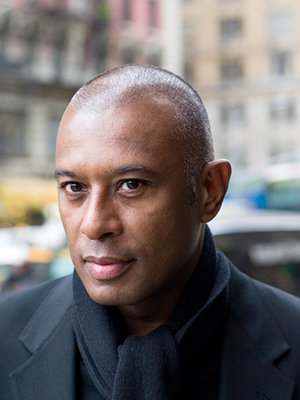 Caryl Phillips was born in St Kitts, brought up in Leeds, and he now lives in New York City. He is the editor of two anthologies, has written for television, radio, theatre and cinema and is the author of three works of non-fiction and eight novels. Crossing The River was shortlisted for the 1993 Booker Prize.

He is a Fellow of the Royal Society of Literature, an Honorary Fellow of The Queens College, Oxford University, and among his literary prizes and awards he was won the Martin Luther King Memorial Prize, a Guggenheim Fellowship, a Lannan Fellowship, and Britain’s oldest literary award, the James Tait Black Memorial Prize. His novel A Distant Shore won the 2004 Commonwealth Writers Prize, and Dancing in the Dark won the 2006 Pen/Beyond the Margins Prize.

My teaching has been principally centred on contemporary literature in English from around the globe. Britain has been a particular focus, but having taught in universities in Africa, the Caribbean and South East Asia, I am familiar with these literatures too. As a teacher of Creative Writing I am committed to ensuring that undergraduates - in particular - have every opportunity to develop their fiction in a disciplined manner.

My own publications - both fiction and non-fiction - can be found on my website. www.carylphillips.com.  I also write regularly for various British and American publications, principally The Guardian (www.guardian.co.uk).

A View of the Empire at Sunset

The Lost Child: A Novel

In the Falling Snow

Dancing in the Dark