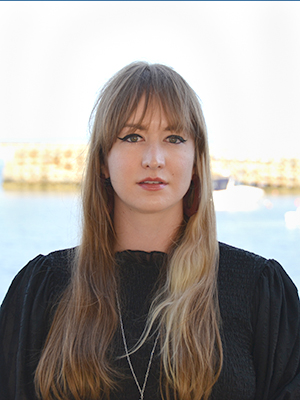 Emily Skillings was born in Brunswick, Maine and received degrees from The New School (B.A. in Dance and Writing, 2010) and Columbia University School of the Arts (M.F.A. in Poetry, 2017) where she was appointed as a Creative Writing Teaching Fellow. Her first full-length collection, Fort Not, was published by The Song Cave in 2017, and was a finalist for the 2018 Believer Poetry Award. She is also the author of two chapbooks: Backchannel (Poor Claudia) and Linnaeus: The 26 Sexual Practices of Plants (No, Dear/ Small Anchor Press). Recent poetry has appeared or is forthcoming in Granta, Poetry, Harper’s, Boston Review, Brooklyn Rail, BOMB, jubilat, Hyperallergic and elsewhere. Her work has been included in both the Pushcart Prize Anthology (2017) and the Brooklyn Poets Anthology (2017). She has taught creative writing and interdisciplinary studio courses at Poets House, Columbia University, The New School, and through Brooklyn Poets.

Since 2009, Skillings has been an active member of Belladonna* Collaborative, a feminist literary collective, event series, and nonprofit publisher in Brooklyn that promotes the work of experimental women writers.

Introduction to the writing of fiction, poetry, and drama. Development of the basic skills used to create imaginative literature. Fundamentals of craft and composition; the distinct but related techniques used in the three genres. Story, scene, and character in fiction; sound, line, image, and voice in poetry; monologue, dialogue, and action in drama.